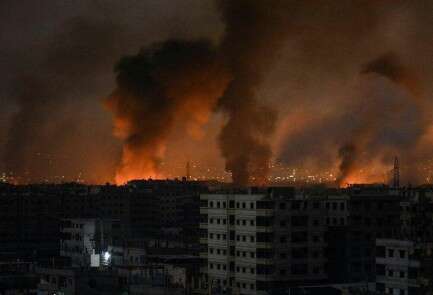 Syrian state television said on Wednesday that Israel struck a strategic area in southern Syria overlooking the Golan Heights where Western intelligence sources previously said Iranian-backed militias are known to be based.

The newsflash on state-owned Ikhbariyah did not give details, but said the strike, involving surface-to-surface missiles began at 12:40 a.m. and was directed on Tal al-Hara, a strategic hill south of Damascus that had long been an outpost for Russian forces but was later taken by Iranian-backed militias, according to Western intelligence sources, and Quneitra province. The hill overlooks wide parts of southern Syria all the way to the Israeli Golan Heights.According to the Syrian state news agency’s report, the country’s air-defense systems were activated against “hostile missiles” launched from the Israeli Golan Heights and Israeli aircraft west of Damascus. In addition, According to the report, two further explosions were heard around 1:00 a.m., one in the Quneitra area and a second in Tal al-Hara, adjacent to Quneitra.

According to state news agency SANA, damages were only material.

However, according to Arab media reports, the brunt of the attack as directed at an Iranian base where Hezbollah and members of Iran’s Revolutionary Guard are stationed.

Syrian officials were quoted in the Arab media reports as saying the attack decimated the base, and that there were many wounded and killed.

According to reports in Syria, a number of sites incurred major damage in the attacks, and there were casualties, although the number of those killed and wounded remained unclear.

The Syrian Observatory for Human Rights reported that the attack was directed, among other targets, against weapons storage sites used by Hezbollah and other pro-Iranian militias in Syria’s and housing long-range missiles and other weaponry. It was further reported that one of the missiles had exploded inside a base in western Damascus where large forces of pro-Iranian militias in Syria were stationed.

The zone has been a target of Israeli raids against Tehran-backed militias which have become entrenched in southern Syria and the Golan Heights near the border with Israel.

State news agency SANA later referred to the last Israeli attacks at the end of last month when it said its air defenses repelled a major attack on some of its outposts on the outskirts of the capital and Homs province.

Diplomatic sources familiar with Syria said at the time these overnight attacks outside Damascus on Iranian-backed forces, including bases of Lebanon’s powerful Hezbollah group, were among the largest strikes attributed to Israel in recent years.

They came only days after the national security advisers of Israel, the United States and Russia met in Israel, with Washington and Jerusalem demanding that Moscow ensure the withdrawal of Iran’s forces from the region, according to intelligence sources.

Prime Minister Benjamin Netanyahu vowed after the trilateral meeting to continue to act against Iranian entrenchment in Syria.

The media gave no further details about the early Wednesday attack that came a month after Israel targeted the same area. In that instance, Syria said its air defenses repelled a major attack on some of its outposts on the outskirts of the capital and Homs province.

In recent years, Israel has carried out hundreds of strikes in Syria that it says have targeted its regional archrival, Iran, as well as Lebanon’s Hezbollah, which it calls the biggest threat to its borders.