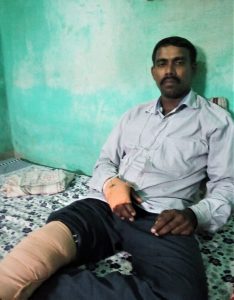 HYDERABAD, India (Morning Star News) – Persecution of Christians in Bihar state, India, has so intensified in the past two years that Pastor Shelton Viswanathan didn’t dare call police after Hindu extremists broke bones in his hand and foot.

“If I force the police to register cases against the assailants, the [Hindu extremist] Bajrang Dal’s top leaders will not spare me,” Pastor Viswanathan told Morning Star News. “The police officials asked me to be wary as the Hindu militant activists roam freely with guns, and through their videos, I can be easily identified by other RSS [Hindu extremist umbrella group Rashtriya Swayamsevak Sangh]-affiliated groups also.”

Violence against Christians in Bihar state, in India’s northeast bordering Nepal and Bangladesh, has increased in the past two years, sources said. Hopes for forming a Christian response center with help from legal aid and relief organizations has yet to be realized, Devesh Lal of the Bihar Pastors Fellowship told Morning Star News.

“The Hindutva [Hindu nationalist] extremists are walking into churches and are disrupting prayer services – on a weekly basis, we hear of threats and attacks on home churches and pastors,” Lal said. “Christian persecution is widely spread across Bihar, and it appears to be a much planned, systematic opposition created to target activities.”

Like Pastor Viswanathan, many of those attacked choose not to call police, as officers are often complicit in Hindu extremist aggression, he said.

“We also see police supporting the perpetrators instead of taking action against them, and the victims do not come forward fearing this bias,” Lal said.

The saffron-clad Hindu extremists who attacked Pastor Viswanathan on June 23 were trailing him on motorcycles on Patna-Sitamarhi Road in Sheohar District when they pushed him off of his scooter, he said. The 46-year-old pastor was distributing gospel tracts in Sheohar District unaware that the members of the Bajrang Dal, youth wing of the Hindu extremist Vishwa Hindu Parishad (World Hindu Council), were stalking him.

“I slowed down my scooter, moved it to the other end of the road and pulled away, but they pushed me with such great force that I fell on the road,” he said. “They were eight men on four motorcycles. One of them clasped me from behind my neck and started beating me.”

Pastor Viswanathan on June 28 received treatment for his injuries at an area health center, where doctors advised bed rest.

“The doctors said that my hand and foot have been fractured,” Pastor Viswanathan told Morning Star News. “I’m trying to limp about, but there is a pain in my injured knee, and I can’t stand straight without support.”

The assailants shot video of him on their phones and warned him not to enter villages in Sheohar District, he said.

“They also placed a Bajrang Dal sticker on my scooter,” he said. “As the passersby gathered to lift me, they ran away on their bikes.”

Originally from the Andaman Islands in the Bay of Bengal, Pastor Viswanathan said he moved to Bihar in 2003 in obedience to a call from God to serve in Sheohar District. He pastors a congregation of 18 people at a house church.

“After the attack, some of my Christian friends went to Sheohar police station to inform them about the attack,” he said. “But the police said their hands are tied and that they cannot take any action.”

In Beheri Basti village of Jamui District, Christians bullied by devotees of the Hindu goddess Kali are also afraid to report abuse to police, sources said.

“No Christian comes forward to lodge a police complaint against them,” he said. “The police have been biased, but if we unite in huge numbers and approach the higher authorities, they can’t ignore us.”

A mob of well-built Kali followers burst into the house of Das’s neighbor during the daylight hours of June 9, beat the married couple there, robbed them and fled, he said. The couple has since ceased any public display of their faith, Das added.

The mob of Kali followers, known as Kali Dal, also demanded 5,000 rupees (US$73) from Das’s family, he said. His family has long suffered at their hands. As a child growing up in a Christian family, Das saw the Kali Dal compel shops to stop selling goods to them. Living as outcasts in their village, his father opened a general store in Jamui town to make ends meet, he said.

“We work very hard in town, as our agriculture fields have been snatched away from us,” the 26-year-old Das said. “They warned us not to conduct Christian prayers in the village, and that our water supply would stop if we are found assembling as a church in Beheri Basti.”

The persecution has been relentless.

“There is no peace here,” he said. “By God’s grace and supply of means, we solve a problem, and no sooner another problem comes up. I don’t even remember the last time I sat in an auto-rickshaw in my village, as we have been banned from using autos and public transport for commute.”

“They have been stopped from receiving government supplies also,” Oraon told Morning Star News. “In Jamui, police framed Christian Dinesh Das and his wife in a false case after beating them up and forcefully ‘reconverting’ them to Hinduism. After learning about the attack on Das and his wife, a few families gave in and donated cash to the Kali Dal activists.”

Another area Christian, Antu Das, told Oraon that hard-line Hindu villagers ridiculed him and called him a Muslim, insinuating a threat of bodily injury in a country with a history of Hindu/Muslim violence.

“I helped him draft a complaint to hand to the police,” Oraon said. “They are scared that they could be under attack at any time. I have been persuading them to take a legal course of action, but their fears and concerns also should be taken into consideration.”

In general, there are three main ways of excluding religious minorities in India: social hostility, laws curbing religious freedom and caste discrimination, according to Andreas Thonhauser, director of external relations at ADF International. In a report published in 2018, the U.S. based Pew research center gave India the highest score for “social hostility” towards religious minorities, including Christians, Thonhauser wrote in a recent issue of the Catholic Herald.

“This intolerance appears to be growing,” he wrote. “In the first quarter of 2019, there were more than 80 reported cases of mob violence against Christians. This means one violent attack almost every day, targeting priests, pastors, families, and whole church communities.”

“I told them that I cannot offer any money, and they started threatening that they will not allow us to use the toilets,” Devi told Morning Star News.

She and her husband went into debt to build the home used for the house church, she said. Working as a cleaner in a hospital in Pune, Maharashtra state, her husband earns 12,000 rupees (US$175) a month, from which they pay 8,000 rupees for the bank loan, she said. They have three children.

“Even if they kill me, it is fine, but I cannot offer a single rupee for their puja,” Devi said. “Even if our family has to starve, it is fine, we will die serving the Lord.”

“The village council summons one family at a time to a public meeting where they force us to drink the water and food offered to the goddess,” Krishna Kumar Suman told Morning Star News. “If we resist, they would beat us up. They don’t care if it’s a woman or minor or child.”

Christians have been ostracized there since April 2018.

“The villagers have been warned from socializing with us, and if they ever speak to us, the village council would impose a penalty,” Suman said. “It is very difficult to survive there. They stopped the supply of water and electricity to our agriculture fields and have made life terrible for us. My elderly parents, who were highly respected once, endure humiliation daily for not giving up our faith.”

Four Kali devotees have blocked the paths to Christian houses by putting up walls and fences.

“Youth members of the families have moved to different cities for work,” Suman said. “Now they are troubling our elderly parents and women by digging holes in front of our homes. These holes would cause water clogging in rain, making it difficult for senior citizens to walk on a path full of puddles.”

Christians make up just 0.12 per cent of Bihar’s 99.9 million total population, according to the 2011 census.

India is ranked 10th on Christian support organization Open Doors’ 2019 World Watch List of the countries where it is most difficult to be a Christian. The country was 31st in 2013, but its position has been worse each year since Narendra Modi of the BJP came to power in 2014.